GOD'S UNIVERSAL SCHOOL DO NOT SUPPRESS THE TRUTH 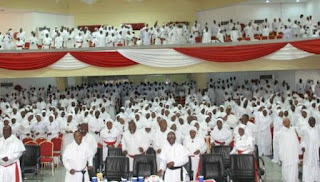 TEXT JOHN 7: 1-END:
You are advised to practise the word of God. The main thrust of our discourse is rooted in verses sixteen and seventeen of our text: "Jesus answered and them and said, my doctrine is not mine, but His that sent me. If any man will do His will, he shall know the doctrine, whether it be of God, or whether I speak of myself." (John 7:16-17).
Reflect on the above excerpt, you will discover why you are warned not to utter evil words on the man of God. If you live according to the dictate of the flesh you shall perish, but if you use the Spirit to destroy the work of the flesh, you are sure of eternal life.
All visions and prayers offered in the flesh are not effective. But visions, dreams, and prayers which are directed by the Spirit to destroy the work of the flesh are effective. If you are prompted by the Spirit to attend a Bible Class Lecture or to offer prayers for somebody, you must not suppress the instinct. It will be a sad situation if you do not act immediately. Your individual knowledge means nothing compared with that of the Spirit.
We set aside days for Bible Class and other occasions to bring to your knowledge what is expected of you in the kingdom, and for you to be able to explain the scriptures to others outside the kingdom. This is my motive for preaching to you daily. It is generally accepted that Brotherhood of the Cross and Star is the greatest among all institutions of higher learning in the world.
There is no church or school which can rival Brotherhood of the Cross and Star.

BROTHERHOOD OF THE CROSS AND STAR TEACHES GOD'S WISDOM:
No institution can be compared to Brotherhood of the Cross and Star in terms of teaching good ideas and values. It is wrong to use KNOWLEDGE AND WISDOM interchangeably. What is acquired in the school is knowledge. Formal education teaches about things of the world, the society, and man's existance. This knowledge does not have spiritual connotation. Hence it is vanity. Brotherhood of the Cross and Star on the other hand, teaches the wisdom of God and His existance. Its preoccupation is to direct you on how to have eternal life and what to do to obtain salvation. These essential aspects of life are not taught in schools. Our teachings, that is Brotherhood of the Cross and Star teachings, are rooted in this scripture: "For what man knoweth the things of a man, save the spirit of man which is in Him? Even so the things of God knoweth no man, but the spirit of the world, but the spirit of God. Now we have received not the spirit of the world, but the spirit which is of God, that we know the things that are freely given to us of God." (1st Corinthians 2:11-12).