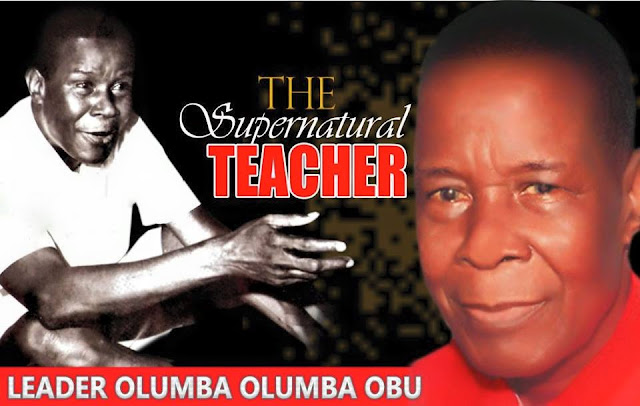 God Is Everywhere, In Everything and Does Everything

An Everlasting Gospel Delivered by the Holy Father, The King Of kings and Lord Of lords, The Sole Spiritual Head Of The Universe. (Leader Olumba Olumba Obu)

FIRST CORRINTHIANS CH 12 V 7- BUT THE MANIFESTATION OF THE SPIRIT IS GIVEN TO EVERY MAN TO PROFIT WITHAL.
ALLWAYS REJOICE WITH GOD
We should not boast or be sad because there are different kinds of duties and no one should impede the other. Some are given to knowing languages, which a person who is not so gifted will no understand, though he may live long in the place. Some have innate intelligence and will pass any examination easily while others will swallow brain pills in vain. The other who is dull in brainwork will be bright in trading. Why dose everybody itch to go to school when God is in everything? You may prosper by keeping poultry farming which is your gift. You may not be as clever as your brother, but God may give you a child who will be clever, and who will be the boss that of your brother. Ask no question because it is God doing His will. You may be given money while another is given craftsmanship. Some make up to two hundred pounds a day but spend them all. If it is the work of God, and not witchcraft as all of you thinks. Go now and impart this knowledge and thank God because He passes in a mysterious way to do his mighty works. In God there is nothing called Good and nothing called Evil. Everything fulfils His will. Anything that fulfil God’s will is good, no matter your opinion if it. Anything that opposes and does not fulfil God’s will is evil. Everything is based on God’s will and its fulfilment.

GOD IS THE REWARDER OF OUR ACTION: DO GOOD ALWAYS
If you hide and commit a crime, punishment will come to you secretly. Many of us are doctors, police, teachers, millionaires and poor people. It is God doing all these things. If you say that you own yourself and can do what you like, you are a liar, because God alone can do what He likes with you because He created you.
He warned Adam that if he ate the forbidden fruit, he would die, therefore, death come from God. The tree is a tree of knowledge of good and evil. When Adam disobeyed God, God pronounced the judgement, which is now fulfilled. Who on earth does not suffer before he gets his daily bread?
Snake cannot work erect as you do because he was cursed by God to crawl. Apart from the women in Brotherhood, other pregnant women suffer before delivery. If you do what God likes, you will not suffer. Therefore Brotherhood has come to lead the world back into the Garden of Eden where there is no death, sorrows and pains.
Today people attribute the power here to demon because Jesus and the disciples were killed without any resistance. They should know that it is no Beelzebub but that same God of old. Do they forget when the serpent from Moses’ rod swallowed those of Pharaoh, or do they forget Elijah and the prophets of Baal?
Brethren, God distributes to people as He likes and He alone is doing this work. That is why it is said that sinners will not escape. Many of those who signed to killed themselves, others signed to steal, and will die at last because of stealing. Since it is a contract, you can sign whatever you like and wait for the due recompense from God.
God is the potter. We are the clay. He moulds us into what He wants. We have no say on the matter. He can make us into vessel of honour or vessel of dishonour. He alone decides. You all have been called by God to be made into vessels of honour through His grace and love. He is the Holy Spirit and with His Spirit, He moulds us. We are His children, God children. We are all vessels of honour by His love and grace, and the kingdom is ours. Pray always, flee from sin, He who gives strength to flee from sin is here and holds you forever. Believe and trust in Him.
Let those who have ears, let them hear. May God bless His holy words. Amen
THANK YOU FATHER