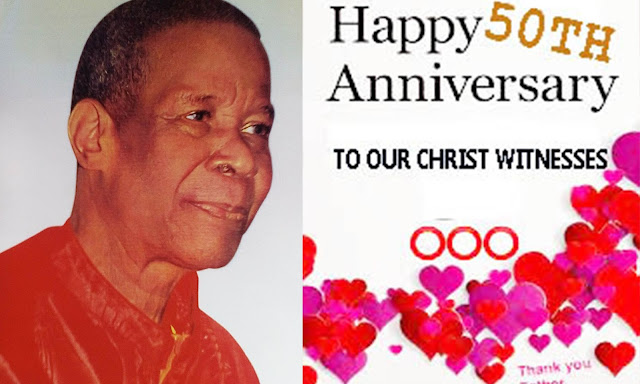 As much as I love high profile individual same as I love fact and truth about God.
One fine day at No. 8 Eton Street Calabar a history repeat its self the third time to confirm Leader Olumba Olumba Obu as God Almighty and this is the time which the  Holy Spirit has Personify. This was what happened.
Leader Olumba Olumba Obu was preaching in the altar with hundreds of members and non-members, and it was time for spiritual chorus, the body in Brotherhood of the Cross and Star called Christ Witnesses was then known as Christ Student raised a spiritual chorus, singing “OWO IKOP KE EYIN NNYIN ABA EYIN OLUMBA ADA UKARA. AKWA EYIN JEHOVAH EMI OWORODE ETOP EMEDI…..OWO IKOP KE EYIN NNYIN ABA EYIN OLUMBA ADA UKARA”. Meaning that OUR NAME IS NO MORE HEARD, THE NAME OF OLUMBA IS THE ONLY ONE RULING. AND THE GREAT NAME OF JEHOVAH LONG EXPECTED HAS ARRIVED.
This song brought confusion and tension in the fold, reason being that it’s a taboo to put an ordinary human being name into song. Members and non-members raise an alarm and told the Holy Father Leader Olumba Olumba Obu in the altar that He should warn this His children call Christ Witnesses that they want people to come and kill Him by putting His name into a song praising Him as God Almighty.
The Holy Father Leader Olumba Olumba Obu jingles the bell and asked the Christ witnesses to change the song, but surprisingly the still sang the same song “OWO IKOP KE EYIN NNYIN ABA EYIN OLUMBA ADA UKARA”. Non-members left while members told Leader O.O.Obu to warm them again, if not they will also leave the fold. The Holy Father hearing this jingles the bell the second time and asked them to change the song to another song. But yet the Christ Witnesses still sang the same song “OWO IKOP KE EYIN NNYIN ABA EYIN OLUMBA ADA UKARA, but this time with the duet, “AMAKEM KUSEN ORO EYE BAHARE EBOT YE ERON”. “OWO IKOP KE EYIN NNYIN ABA EYIN OLUMBA ADA UKARA.
Members started packing their bags filing out and promise never to return, remaining only 3 members (the remnant), the Christ witnesses and the Holy Father. This time the Father said they should continue to sing the song. He told them that it is time to reveal the son of man, the Holy Spirit personify and God Himself to the whole world, and that “it is not the flesh that reveals Him to them that it is the Holy Spirit of God. This was the same statement Our Lord Jesus Christ made when He asked His disciples who He is, many said you are a prophet, many said you are this or that but Peter said you are Christ the Son of the living God. And Christ said, “Peter for it is not the flesh that revealed this to you but the Holy Spirit”.
Scripturally, similar event happened in Heaven when God the Father wanted to know His true worshiper. He brought forth His son that all the angels may worship Him, but Lucifer and his followers refused to worship Him, they all fell out from Heaven to the earth.  This was God the Father been truly revealed by the “Angels”, while in Christ era “Peter” truly Revealed Him as God the son, in this our generation without doubt “The Christ Witnesses Body” revealed the Holy Spirit personified in Leader Olumba Olumba Obu.
To end this encrypted script, this Christ witnesses Body is clocking 50 years today 30th Sept 2018. As such with a special ovation, joy, and Happiness I enjoin the world to celebrate these great people of God, Called by God to reveal Him in this last advent…….join me and the entire BCS as I wish them A HAPPY GOLDEN JUBILEE.
TYF
Share !
Newer Posts Older Posts Home
Subscribe to: Posts (Atom)