By: Nsisong Eyo
At 34 Ambo Street Calabar.
CRBC: What do You say Brotherhood means?
Leader Olumba: I have told you that Brotherhood mean
everything created by God,
with God Himself as the Head.
you are Brotherhood, she is
also Brotherhood.
CRBC: When did You founded Brotherhood?
Leader Olumba: God is the founder of Brotherhood, so it
existed before the world was
created. So it as no origin.
CRBC: Are You God, because
Your members say You are
God?
Leader Olumba: I am not God, I am not Jesus Christ, I am not a
Prophet. Who am I to be
known as such? My name is
Leader Olumba Olumba Obu,
The Sole Spiritual Head of the
Universe.
CRBC: But why don’t You stop Your members from addressing You as God?
Leader Olumba Obu: Have you
also heard that people are
calling Me Belzebum, Vampiyer,
Demon and all such names, have you seen me stop them?
CRBC: No
Leader Olumba: Then if I didn’t stop them, and My Children call
Me God, why should I stop
them? Whatever you call God,
that is what He is to you.
CRBC: Why do You say people should not eat meat?
Leader Olumba: Animals are all Brotherhood. They have the
same blood as man, they feel
pains too, so they are our
brothers and you don’t have to
kill them.
CRBC: Thank You. But what is Your mission since You say You
are not a prophet?
Leader Olumba: I have come to transform sinners to the way
God wants, and to judge every
man according to his works.
This task can not be done by
any prophet, not even Our Lord
Jesus Christ. It is the greatest assignment God has come to down on earth, and finally, to
establish the kingdom of God
on earth.
CRBC: Is Your church the kingdom of God?
Leader OLumba: Brotherhood of the Cross and Star (BCS) is not a Church. It is that New
Kingdom which Our Lord Jesus
Christ promised us. You don’t
know that the Father is here,
and is talking to you? When He reveals Himself to you, you will
know Him.
CRBC: You said reveal?
Leader Olumba: You don’t know Him yet. One day you will
know Him proper. He is
working everywhere. Let me
tell you that this very day of
this interview which you are
conducting was already fixed before the world was made,
including the number of
questions that you would ask.
Initially, you were not the one
that CRBC assigned to come
here, but you see, according to the ways of God, since it was
you that was assigned by God,
that was why they later
changed the other person and
then sent you.
CRBC: But we heard that there are pot of blood kept here?
Leader Olumba: You come with me please. (He took them around) This is how we
stay from January to December, so nothing is hidden. Take a walk around, you wouldn’t see no such things here. It is the Holy Spirit that we have.
CRBC: Should we go and tell people in the world that what they are saying about you, being evil is wrong, seen we have seen it with our eyes?
Leader Olumba: No don't do that, if the first people that came here, came and told you that you what people say about me is not correct you wouldn't have come to witness God's glory and receive His blessing today so allow other to come and witness the truth and receive God's blessings.
Thank You Father. 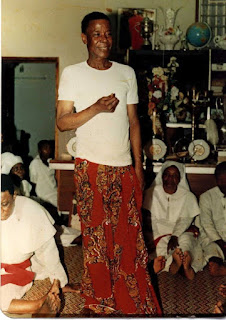