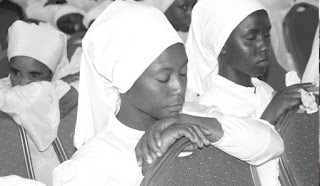 BY: Leader Olumba Olumba Obu
I want to use an earthly situation to illustrate a heavenly situation for you. There was a certain village which was always invaded by thieves and robbers who molested the villagers. Before visiting any person's house for the purpose of plundering, they would send a letter informing the person of their intention to visit on a scheduled date. Everything was done to stop their activities but there was no success. The government could not legislate against them, the Police could not control them because they had their own police and army.

On one fine night a wealthy woman, realizing the situation of things knelt down and started to pray that God should provide employment for all the thieves and robbers because it was not their pleasure to steal but because of lack of employment. As she was praying, little did she know that the thieves had already taken positions in the compound and even inside her rooms. The spies among them had already hidden under the bed. She did not quite end her prayer before the robbers started coming out one by one, masked to hide their identity. They all expressed surprise at the type of prayer she offered, and that they thought she would abuse and curse them for their actions. They told her that since she did not utter disgraceful and abusive words, they would go back without taking anything from her house, and that no robbers will ever break into her house and steal. They confirmed in their confession that it was not their pleasure to continue to molest innocent people but that they had neither jobs nor any form of livelihood to maintain their families, some of which had a numerical strength of twelve. They could not feed and clothe them. They were only forced by circumstances to steal.

Their explanation evoked a deep sympathy from the woman who was moved to give them money, but they maintained that they would not take anything from her since she had prayed God to provide them with jobs. Having been impressed by the woman's action they went away with the hope that God would provide them with employment. The woman's prayer worked like magic. That same week all of them gained employment in fulfillment of the woman's request, and the activities of invasion and piracy ended automatically. That is the Efficacy of Prayer.
Share This:
Facebook Twitter Google+ Pinterest Linkedin Whatsapp