Home » How To » ILLUSTRATION: THE RICH BARREN QUEEN AND FOUR POOR CHILDREN 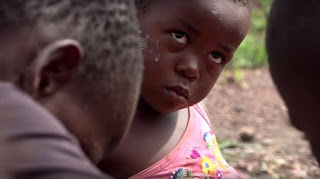 BY: Leader Olumba Obu
There once lived a very wealthy king who had no child. He tried everything within his capability to see that his wife was pregnant and give birth to a child, but all to no avail. He then took a challenge to the whole world that whosoever shall cause his wife to give birth to child will get a handsome reward from him.
He even promised to make such a one a millionaire. One day, the wife of the rich king (the queen) was standing at the balcony of her storey building and as she turned to look down, she saw a young man parading the compound, she then called on him to come up. The young man complied. On inquiry about his background the man told the Queen that he had four children, and had since been living in someone's veranda but that the owner of the house has ordered him out with his children. He went further to intimate the queen that one of his sons came by an envelope containing five pounds as they were roaming the street in search of shelter, and that he is using the five pounds to buy empty bottles and cans for resale so that he might use the proceeds there from to feed his family. On hearing this story, the queen was moved with pity. She ordered that the stewards, cooks gardeners and all those concerned with house keeping in the kings compound should be supplying the young man with empty bottles and similar containers as a way of assisting the young man to fend for his family.

You may also like: CHILDREN: THE LEADERS OF TOMORROW.

After this, it was not long the young man returned to the king's compound for containers. This second time the queen gave him money and ordered that he should go and bring his four children live in the king's palace. And so when the young man finally brought children, the queen went and narrated the story to the king and solicited for maximum care for them. She told the king that it is God that has given them those children. She condemned the thousands of pounds they had spent to native doctors and others in the name of looking for children. She then decided to devote her whole time and fortune for the training of those children. From then, the queen saw herself as not having the need for her own children anymore. Rather she claimed those children to be hers forever.
The King also consented to this. The children had no alternative but to become part and parcel of the king's household. The last born of the four was still a baby and the paces took the baby as her newborn baby. This baby slept with the queen, soiled her bed and yet, received the necessary care from the queen. In spite of this, people started telling the queen that they can help her give birth to her personal child, but the queen was always shunning them. She made them understand that she had no need for any other child and that she has gotten the children she needed. She stood her ground that nobody can deceive her and dupe her in the name of helping her to get pregnant anymore. She was contented and happy with these four children and as such, had no need for more.
As God would have it, the following month, she discovered that she had missed her menstruation but she did not take it for pregnancy. After few months, the family doctor was called in to examine the queen. The doctor, having carried out a comprehensive test, told the queen that she was pregnant.

This report did not bother her at all instead, she saw state as sickness. A couple of months passed, the situation remained the same. At the expiration of nine months, she gave birth to a male child. This was the time she became, convinced that she was truly pregnant. And she counted her first child as the fifth child she had. As the years passed by, she personally gave birth to four children; two boys and two girls, just as she adopted. Even after giving birth to four children, she did not alter the seniority rank.
The first of the adopted children remained the most senior heir-of the family. The second, third, forth to the last born from her1 remained the last. She did not discriminate or treat any of the children with concession. All the children enjoyed equal love from the queen.
Note that only four children were collected from the young man. He was given money to go and feed with the wife. But when eventually things turned out this way, the queen reminded the king of the need for the young man and the wife to be accommodated and cared for too. This was done.
Have you now realised the reward of receiving and caring (or children? In spite of the fact that the king was rich, was he able to get children with the aid of his position in the society and money? No, He had those children because he received other children and cared for them.
THANK YOU FATHER.
Share This:
Facebook Twitter Google+ Pinterest Linkedin Whatsapp