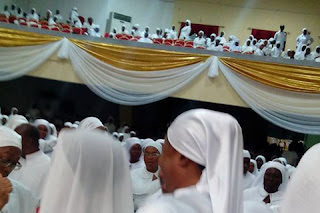 FIRST BIBLE LESSON: ROMANS 4:16-17
"Therefore it is of faith, that it might be by grace; to the end the promise might be sure to all the seed; not to that only which is of the law, but to that also which is of the faith of Abraham; who is the father of us all, (As it is written, I have made thee a Father of many nations,) before him whom he believed, even God, who quickeneth the dead, and calleth those things which be not as though they were."
SECOND BIBLE LESSON: GALATIANS 4:22-23
"For it is written, that Abraham had two sons, the one by a bondmaid, the other by a freewoman. But he who was of the bondwoman was born after the flesh; but he of the freewoman was by promise."
GOLDEN TEXT: GALATIANS 3:15-16
"Brethren, I speak after the manner of men; Though it be but a man's covenant, yet if it be confirmed, no man disannulleth, or addeth thereto. Now to Abraham and his seed were the promises made. He saith not, And to seeds, as of many; but as of one, And to thy seed, which is Christ."