THE JUST SOLICITOR AND ADVOCATE 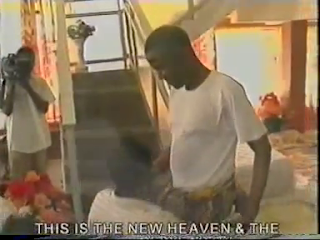 FIRST BIBLE LESSON: LUKE 18:18-19
"And a certain ruler asked him, saying, Good Master, what shall I do to inherit eternal life? And Jesus said unto him, why callest thou me good? None is good, save one, that is, God."

SECOND BIBLE LESSON: ROMANS 3:10
"As it is written, there is none righteous, no, not one."

GOLDEN TEXT: 1 JOHN 1:8-9
"If we say we have no sin, we deceive ourselves, and the truth is not in us. If we confess our sins, he is faithful and just to forgive us our sins, and to cleanse us from all unrighteousness."

FIRST BIBLE LESSON: LUKE 18:18-19
"And a certain ruler asked him saying, Good Master, what shall I do to inherit eternal life? And Jesus said unto him, why callest thou me good? None is good save one, that is God."
HUMILITY THAT IS WORTHY OF EMULATION:
Brethren, have you ever heard or witnessed such humility as exhibited by Our Lord Jesus Christ? He was called Good Master, but He rebuked the ruler: "Why callest thou me good? There is none good but God."
If it were you, you would have accepted that title and gone ahead to demand for more appellations. The true name of God is not God but Good. God's other name include PERFECT MASTER, EXCELLENCE, LORD, to mention but a few. NO MAN SHALL CARRY THE EXALTED TAG AS HIS EXCELLENCY ON HIS NAME, FOR NONE IS EXCELLENT BUT GOD. THIS GOD WHO IS THE MOST EXCELLENT HAS COME TO CHANGE YOU AND LEAD YOU TO THE ACCURATE KNOWLEDGE OF THE TRUTH.
Sinfulness does not end with going out to steal, fornicate, tell lies, and to indulge in other evils. Man by nature is a bunch of sins. He was conceived in evil and born in iniquities. To show you how perfect God is, "...He makes his sun to rise on the evil and good, and he send his rain on the just and unjust." (Matt 5:45).
How many people could do this? None. Every one instead is bent on retaliating one another. If you retaliate, you have gone against the will of God. On the other hand, to forgive and become charitable does not mean that you are not a sinner. If you are exalted by God, that does not stop you from being a sinner. Therefore, if you are exalted, do not seek ways and means of debasing another. If you humble yourself after being exalted by God, you will continue to enjoy God's forgiveness; but if you become pompous, then you will have yourself to blame.
The highest thing to do is to admit that you are a sinner. Then the blood of Our Lord Jesus Christ will be used to cleanse you and purge you of every manner of sins. Henceforth, do not claim to be good or that you come from a God- fearing family; for God alone is the Perfect Being. There is no man who knows himself and therefore there is nothing good in him. It should be noted that man was made from the dust of the earth which if filled with dirts. For this reason, he cannot exist without the traits of this dirts in him. However, if you expose(CONFESS) these dirts (SINS), with a penitent heart, YOU WILL BE FORGIVEN. Read the Second Bible Lesson below.

SECOND BIBLE LESSON: ROMANS 3:10
"As it is written, there is none righteous, no, not one."
CHRIST DIED TO REDEEM US:
The Second Lesson only confirms the statement recorded in the First Lesson. Before the advent of Christ, people had thought that there was a righteous person on earth. Until Our Lord Jesus came and died for the sins of the world, no one believed that man is filled with sins, but the Holy Spirit has come to remind us that we are all sinners. AMONGST THE ANGELS AND MEN THERE IS NONE RIGHTEOUS EXCEPT GOD. TO SAY THEREFORE THAT SOMEBODY IS RIGHTEOUS AND GOOD IS FALSE. FOR YOU ALSO TO SAY THAT YOU ARE A GOOD PERSON REVEALS THAT YOU ARE A LIAR AND THERE IS NO SALVATION FOR YOU. WHOEVER CLAIMS TO BE RIGHTEOUS HAS INVARIABLY MADE CHRIST A LIAR AND HAS FORFEITED HIS SALVATION; FOR THE WORDS OF THE LORD HAS NO ROOTS IN HIM. (JOHN 1:10).
The Lord did not come to die for the righteous but for the sinners. Therefore, if you accept that you are a sinner, then his precious blood will cleanse you. That is why it is said that when Our Lord Jesus Christ comes, He shall have nothing to do with sinners, but He will come for the them that are ready for Him. THESE ARE THOSE WHO SEE THEMSELVES AS SINNERS.
God does not exalt you because of your money and power. YOU ARE EXALTED, BLESSED AND CLEANED ONLY IF YOU ADMIT THE FACT THAT YOU ARE A SINNER. It is for this reason that God has chosen the foolish things of this world to confound the wise; and God has chosen the weak things of the world to confound the things that are mighty. (1 Corinthians 1:27-28). This is done so that man would not boast of himself. YOUR BOAST SHOULD BE IN THE LORD. If you were to realize the efficacy of the words of God, you would not ask God to punish any person nor to curse him. Are you not a sinner? Or do you want your sins to remain with you? Man has got to be content with his status in life. No matter how lowly placed you may be, do not take offense and ask God questions. It is more profitable to obey God and surrender oneself to Him, for without Him, you are an empty vessel. It is God that operates in man. If you admit your sins and you are penitent over them, then God who is the source of everything, will take care of you. Whoever claims to be sinless compares himself with God. On the other hand, when he admits he is a sinner, and does not impute sin upon another, he is a real child of God. Read the Golden Text below for clarification.

GOLDEN TEXT: 1 JOHN 1:8-9
"If we say we have no sin, we deceive ourselves and the truth is not in us. If we confess our sins, he is faithful and just to forgive our sins, and to cleanse us from all unrighteousness."
CONFESS AND BE FORGIVEN:
Our Spiritual Chorus says, "I am a sinner, Lord wash me clean." The song confirms that statement of Our Lord Jesus Christ that there is none righteous except God. He went further to say that whosoever says he is righteous is a liar and no truth is found in him. (1 JOHN 1:8). That is the only gateway to heaven and the source of our salvation. If you do not impute sins upon others you do not curse them and ask God to punish or kill them. God, out of his mercy forgives us. No amount of money could buy us such forgiveness.
The problem between God and man is that, any time man exalts himself and disobeys God, he has to be debased. Many people like to recount many good things they have done to others but which they have been negatively rewarded. Such a statement is not encouraging. No man is capable of doing anything to another person. It is God alone who has the ability to do everything unto man. If you see yourself as a sinner, you will submit to God; you will humble yourself; you will not judge or condemn anybody; and you will not request anything from God. You will behave like David who admitted his sins and said: "Wash me thoroughly from mine iniquities, and cleanse me from my sins. For I acknowledge my transgressions: and my sins is ever before me. Against thee, thee only have I sinned and done this evil in thy sight: that thou mightest be justified when thou speakest, and clear when thou judgest. Behold I was shapen in iniquity and in sin did my mother conceive me." (Psalm 51:5-7).
May God bless His Holy Words. AMEN.
THANK YOU FATHER.