THE PANACEA FOR WORLD PEACE 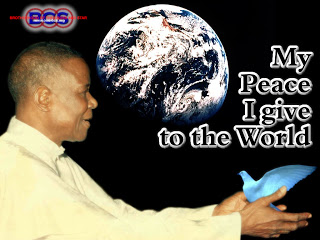 Second Bible Lesson: Matthew 23:8
"And be not ye called Rabbi; for one is your Master, even Christ and all ye are brethren."
HE IS THE ONLY TEACHER:
Brethren, call no one teacher because God is the only Teacher and instructor. In the same vein, do not allow any man to call you teacher for we all are brethren. If you were to know that we come from the same stock, would you tell lies or try to cheat or harm your fellow brother? Would you cause division, create class or race distinction if you were to know that we are all one? No man would despise the other if he were to realise that no difference exists between him and his neighbor.
HIS TEACHING PROVIDES LIFE:
Every other teaching and exercise is mundane and destructive. But the teachings of Our Lord Jesus Christ lead to eternal life. When it is said that the Lord took a cane and flogged the people who were carrying on commercial activities in His Father's temple (John 2:15-16), it does not mean that He used an ordinary cane to whip them. It was through the word of God preached to them and by listening to His words, their conscience were pricked. We are the temple of God which have been used for commercial and filthy purposes. When He had flogged them thoroughly and he had also driven out of them the lust for wealth, the people regrouped and asked Him what sign He could offer as a proof of His power. Then He told them that he could destroy the temple and reconstruct it within three days (John 2:19). The people again did not understand Him as they did not know the temple He meant. Christ made it clear that He willingly surrendered His life and that no man could snatch it from Him and that He could retrieve it if He so desired (John 10:18). When He talked of destroying the temple and rebuilding it in three days, the people looked at Him as a mad person. They told Him that it took their fathers forty-seven years to construct that temple which He claimed could be rebuilt within three days, if destroyed. The people took that statement as evidence of His insanity. No man would have been able to hurt Christ if He had not consented to it. Unlike human beings, He is not subject to human destruction. He came to lead men to the truth. GOD CHANGES NOT AND HE IS NOT SUBJECT TO MEN'S OPINIONS. HE ABIDES IN YOU AND IN ALL THINGS. LISTEN TO HIM ALONE AND DO HIS WILL. DO NOT EMULATE YOUR PARENTS, GOVERNMENT OR FRIENDS. IF YOU DO THE PEOPLE AND INSTITUTIONS WILL LEAD YOU ASTRAY.
Christ told the Jews that if they desired to know the source and efficacy of His words, they should put His words into practise. It is necessary that all of us should emulate and obey Christ. Brotherhood of the Cross and Star is the new Kingdom of God. The pathway to life, light, love and truth. People are merely wasting their time, money and energy to investigate Brotherhood. Nobody takes Brotherhood of the Cross and Star seriously, not even the members. But it is the New Kingdom as well as the Christ. The condition in it is NO CROSS, NO CROWN. This explains why He said that he who overcomes will be made a pillar in His Father's temple (Revelation 3:12), and will rule over nations. As Christ overcame death and was crowned so also shall we overcome and be crowned. This means oneness which is Brotherhood by implication. Read our Golden Text once again.