Home » Father's Sermon » WHO ARE THE ELECTS?

WHO ARE THE ELECTS? 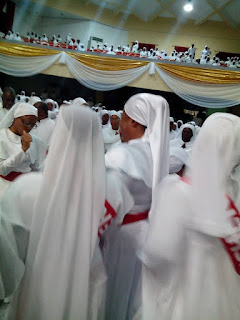 FIRST BIBLE LESSON: JAMES 3:17-18
"But the wisdom that is from above is first pure, then peaceable, gentle, and easy to be entreated, full of mercy and good fruits, without partiality and without hypocrisy. And the fruit of righteousness is sown in peace of them that make peace."
SECOND BIBLE LESSON: JOHN 14:27-28
"Peace I leave you, my peace I give unto you: not as the world giveth, give I unto you. Let not your heart be troubled, neither let it be afraid. Ye have heard how I said unto you, I go away, and come again unto you. If ye loved me, ye would rejoice, because I said, I go unto the Father: for my Father is greater than I."
GOLDEN TEXT: MATTHEW 24:21-22
"For then shall be great tribulation, such as was not since the beginning of the world to this time, no, nor ever shall be. And except those days be shortened, there should no flesh be saved: but for the elect's sake those days shall be shortened."