Home » Blog Post » SOLID 76 YEARS OF OVERCOMING ANGER, ONLY GOD CAN DO THIS

SOLID 76 YEARS OF OVERCOMING ANGER, ONLY GOD CAN DO THIS 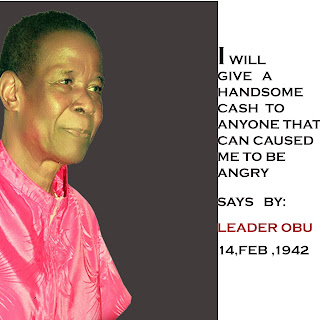 I was with a 5kg ice block in my hand today when this piece you are reading now came, I thought over it till my iceblock melted, the motor neuron of my brain gives room for a shortcut when I saw it press Cntrl + S and the piece was saved in my mind, friends have tried everything possible to save it for another day yet it keeps popping up and I have to let this cat out of the bag to be at rest.
This is the piece: Can any human being on earth stays for 76 years and he is not annoyed? how possible is that, if it not so possible why then Leader Olumba Obu since 1942 challenge the whole world that anyone who can cause Him to be angry, He will personally award the person with a handsome cash award or anything equivalent. He even promised to divide His Kingdom into an equal part for such individual.
Did anybody even challenge Him after His statement?- Yes thousands of people have been challenging Him since then, example of such individual include, Linus Umoh, he called Leader Olumba Obu belssebom and bloodsucker, he blaspheme against Olumba Obu but his profanity was put to naught as Olumba Obu didn’t answer nor say a word, instate He blesses him and called him His beloved child, oh my God what type of human being is this? Peter Linus Umoh did that so that Olumba Obu may be angry and then he could request for Him to divide his Kingdom for him but failure landed on his side.
I could have mentioned so many people that tried and are still trying but failed, but that’s a piece for another day, what about many churchgoers who said Olumba Obu has died my question to them is can God die? Shun hatred and blaspheme and follow love that is in human form. His name is Almighty Father Leader Olumba Olumba Obu……Thank you, my God, for coming down in human form. Happy victory of the Holy Father Overcoming Anger. I love you Father, if you love Him share to the whole world.
You can login to nsisongeyo.blogspot.com for the next episode.
Thank You Father