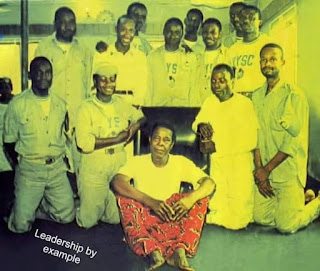 FIRST BIBLE LESSON: JOHN 13:4-5
"He riseth from super, and laid aside his garments; and took a towel, and girded himself. After that he poureth water into a basin, and began to wash the disciples feet, and to wipe them with the towel wherewith he was girded."

SECOND BIBLE LESSON: MATTHEW 20:28
"Even as the Son of man came not to be ministered unto, but to minister, and to give his life as a ransom for many."

GOLDEN TEXT: MATTHEW 11:29
"Take my yoke upon you and learn of me; for I am meek and lowly in heart and ye shall find rest unto your souls."

BE A SHINING EXAMPLE
Brethren the above texts and introductory song form the theme of our gospel. We are all enjoined to walk according to the footsteps of Our Lord Jesus Christ. The exemplary leadership of Christ portrays a lifestyle which every Christian should emulate.
Nothing should be added or subtracted from His sterling qualities and life pattern. He is the mediator between God and man. He is the heir of the new covenant. CHRIST IS THE ONLY TRUE LEADER AND TEACHER OF MANKIND. Whether you are a man or woman, young or old, black or white, rich or poor, strong or weak, it behooves everyone of us to learn of Him.

Golden Text: Matthew 11:29
Take my yoke upon you, and learn of me; for I am meek and lowly in heart: and ye shall find rest unto your souls.
BE STEADFAST:
Whatever name you are called by the world should not bother you. Continue to be upright and steadfast, for you will find everlasting peace unto your soul.
Christ had prophesied His arrest, trial and crucifixion. The second coming of the Lord, therefore, has nothing to do with evil doers, but it is for gathering those who have kept themselves holy in readiness to receive Him. He has come in the power of the Holy Spirit, and with fire to embrace those set aside for Him. (John 17:6,12). Therefore, all those who believe in Him and fervently put their trust in Him preserve themselves for Him. This explains the reason why He enjoins us to call no one teacher; that there is only one teacher, for we are all brethren.
The world has made several allegations against Leader O.O.Obu. All the allegations mean nothing to me because they are false. What concerns me most is practising the injunctions of Our Lord Jesus Christ.
EVERLASTING KINGDOM:
This is the kingdom that was seen by Nebuchadnezzar in his dream, and Daniel interpreted. The world has refused to obey the Lord's instructions. That is why peace and prosperity have eluded them. Neither Christ nor His disciples charged or extorted money from those they worked for. All that His disciples and Christ Himself did was to offer free service to people. Besides, He gave every glory to the Father. That is the same attitude we adopt in this kingdom. Christ did not disgrace anybody. He did not begrudge even his adversaries. He did not also preach about money, wife, children or any material things; but He centered His preaching on the Holy Spirit, love, peace and oneness.
THE HIDDEN POWER:
There is only one Teacher, one Father, one Lord and one King. We all are brethren. In spite of the various persecutions He encountered, He continued to give His peace and blessings to His adversaries. That is the "HIDDEN" power in this kingdom. Do not seek to defend yourself or Brotherhood of the Cross and Star. Do not contest the scriptures or the doctrine of Brotherhood of the Cross and Star with anybody. Do not also get angry with any person in whatever he says against Brotherhood. But live in God's love, peace and humility. Do not expect your enemies to see any good thing in you.
Christ died and on the third day. He resurrected and promised to be with us always until the end of the world. Thus He has been with us since then. Does it mean that His ascension into heaven is synonymous with His physical absence on earth? When He came down into the world, was any vacuum created in heaven? He said: "And no man hath ascended up to heaven, but he that came down from heaven, even the Son of man which is in heaven. (John 3:13).

OMNIPRESENT GOD:
There has never been a time He was not in heaven and on earth. Why then should the world seek the living amongst the dead? Is He not the Mediator between God and man? Is He also not the author and finisher of our faith? He is the one that is doing the wonderful works on earth today.
Brethren it is said that a stroke of the cane is sufficient fore the wise person. May the Lord bless His Holy words. A-men.